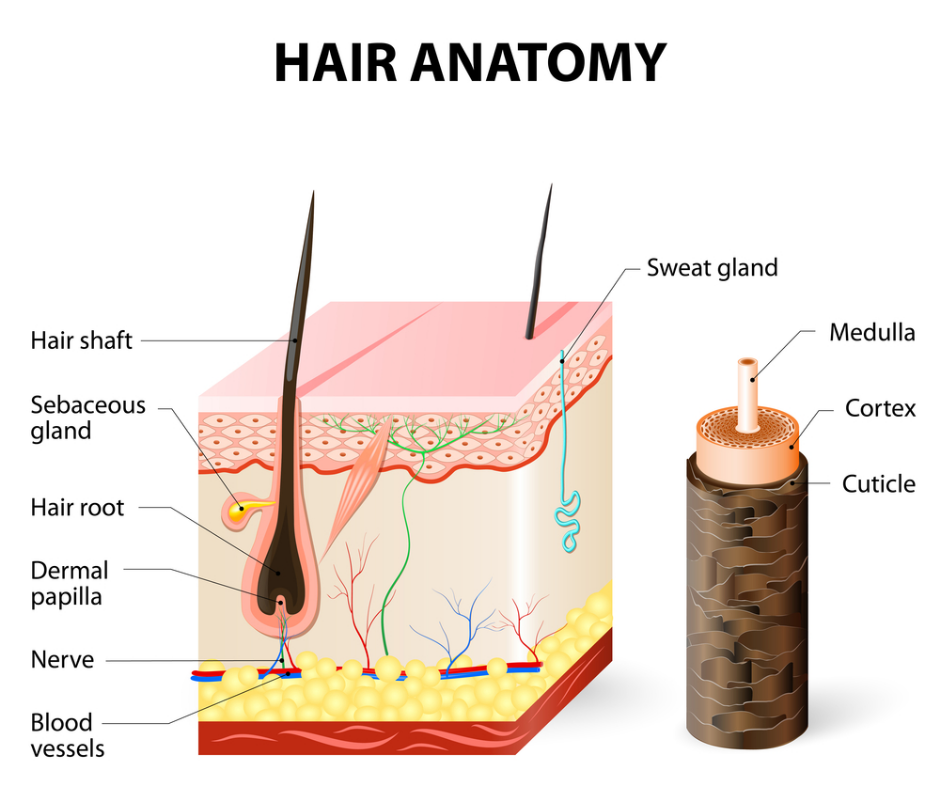 Hair Structure – Everything You Need To Know

Human hair performs not only protective functions and is an ornament of appearance, but also indicate the state of health of his body. Thick and strong hair start to hurt and die off with the development of any diseases. In addition, each hair has its own life cycle and rate of daily loss. Knowing what hair is made of, what is good for a head of hair and what is bad helps people avoid many mistakes in care and keep their hair lush for life. This article will help not only to learn about the structure and life cycle of hair, but also how to determine the rate of daily hair loss.

Types and functions of human hair

According to anatomy, most of the human body is covered with hair. They are different and, accordingly, perform different functions.

Long – grow exclusively on the head and have a more complex structure;

Bristly – grow on the eyelids (eyelashes), eyebrows, in the nose, in the ears;

Depending on the type, there are the following hair functions:

aesthetic (long hair on the head, forming the hairstyle and appearance of a person).

During the period of prenatal development and in the first months of life, an infant hair is formed exclusively in the infant. They are usually soft and short. Further, during the first year, they are replaced by intermediate ones. During puberty, the final formation of hair on the head and body occurs.

The composition and structure of the hair

The chemical composition of hair growing on a person’s head is varied. It includes various substances of organic origin.

As a percentage, they are:

Keratin (a protein consisting of the amino acids cystine and methiotin) – 78%;

Under the influence of various external factors (not always favorable) their percentage ratio may change. Get a complete picture of the features of the structure of the hair, you can use the pictures that were made after studying the hair under a microscope.

As for the structure and structure of human hair, each of them consists of two parts:

The visible part of the hair belongs to the dead structures (the core), and the processes of cell division and hair growth occur in the skin where the hair follicle is located.

Strictly speaking, the following components of the system can also be attributed to the definition of what is human hair:

hair follicle and its papilla;

muscle responsible for the movement of the hair (located in the dermis);

sweat gland (responsible for the secretion of cellular metabolism products).

Also of interest is the structure of the hair, if we consider it in cross section. It consists of several layers consisting of various substances that make up the hair structure.

The structure of the hair shaft is layered. Although it is not considered living tissue, the hair structure in the outer (visible) part consists of three layers:

The hair cuticle consists of adjacent keratin scales that perform a protective function. They are imposed on each other on the principle of tile, from the root to the tip. This shell also has a layered cellular structure, the number of layers varies from 5 to 10. The appearance of the hair depends on the state of the outer shell – their luster and smoothness.

The second layer, the cortex, constitutes the main hair shaft, which dictates its thickness. This layer has a protein nature and consists entirely of keratin. The number of collagen fibers that make up the keratin layer, tens of thousands. Intertwined with each other, they form a pattern of chains. The resulting collagen chains form the structure of this layer. Cortex also contains coloring pigment that causes hair color.

The core of the hair, or medulla, is present only in long hair growing on the head. In its composition – the medulla, saturated with air bubbles, responsible for thermal conductivity.

There are the following phases of hair growth:

This is the most active stage of the life cycle. The cells in the hair follicle begin to rapidly divide under the influence of the hormones responsible for hair growth. The follicle takes the form, formation of the hair shaft begins, melanin is formed. At this stage of hair growth daily increment is 0.5 mm. This is the longest period, whose duration varies from 2 to 5 years. In women, the hair stays in the anagen stage for 5 years, in men it is much less – 2 years. In the stage of active growth is usually up to 90% of all the hair on the human head.

The duration of this intermediate phase of hair growth is the shortest – from 2 to 4 weeks. At this stage, the hair bulb is already separated and begins to move towards the upper layer of the epidermis. Due to separation from the feeding blood vessels, the vital activity of the follicle ceases, and its death occurs. The production of melanin also stops. About 2-3% of the total hair volume is in this condition. It is these hair shafts that make up the daily rate of natural loss.

The final stage of the life cycle is characterized by a period of rest. Hair is held on the head only by the skin and, at the slightest impact, is separated. At this stage, the birth of a new follicle begins, then it moves into the anagen phase. The duration of telogen on average is 3 months. About 10% of the total amount of hair on the head is in this state.

The rate of natural hair loss is:

Blondes have up to 100 hairs per day;

It is also noted that hair grows fastest up to 30 years. Further, the dying off of the bulbs and hair loss increases, and the number of viable follicles rapidly decreases. This is due to a decrease in the production of sex hormones and the aging of the body. In the period of wakefulness, growth accelerates, at night it slows down. Also, the growth rate depends on the season – in the fall and spring, it is higher.

As a result of the impact of many external and internal factors, the life cycle of the hair can be broken. In this case, intensified dying off and hair loss begins. To determine the number of daily falling hair, it is best to count them after washing your hair, on a pillow after sleeping and add about 10-15 pieces for other losses. If the rate of natural loss is exceeded, then you need to identify the causes of hair loss and take action, since uncontrolled hair loss can turn into baldness. Alopecia is a serious disease that is easier to prevent and stop its development in its early stages.