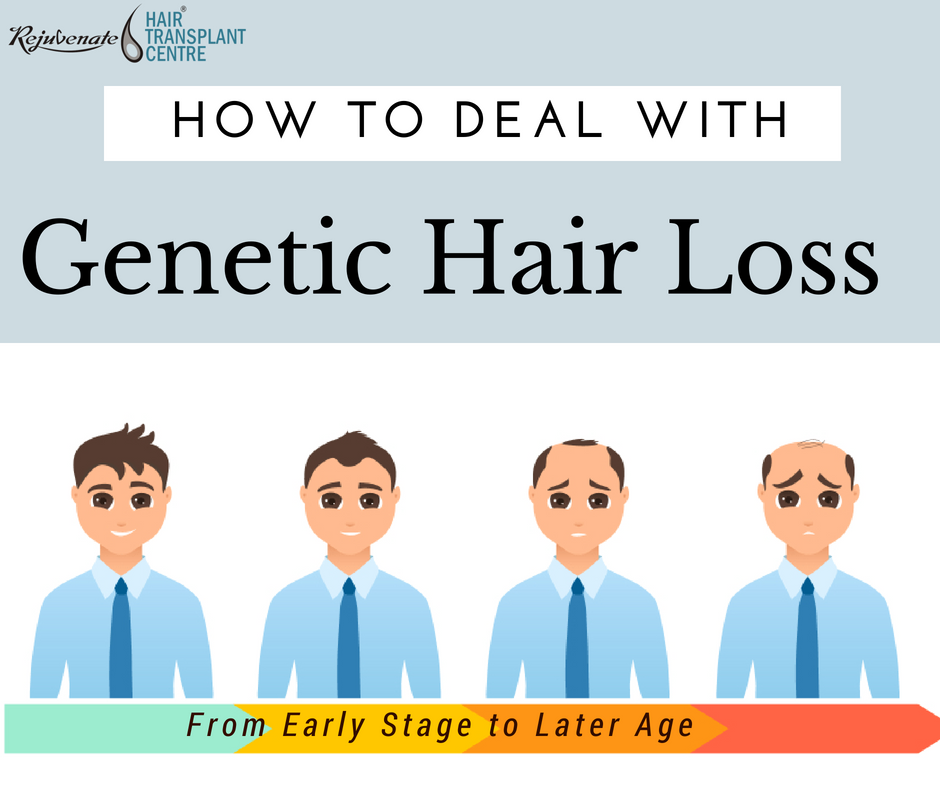 How To Deal With Genetic Hair loss

Genetic hair loss affects almost 50 percent of all males and almost 40 percent of all females as they grow by their age. It means that if people live long enough then maybe half of the population suffering from thin hair and baldness.

As it is noticed that hair loss mainly begins while at the age of 20s and 30s. This condition is properly known as “androgenetic alopecia”.

Generally, the hair loss pattern in women differs from male-pattern baldness. In men, the hair loss begins with temples and recedes from the hairline as it forms as “M” shape. And in women, the hair start becomes thinner from all over of the head and usually, it didn’t recede as men. It also shows that Androgenetic alopecia happens rarely in women which leads to permanent baldness.

Although many kinds of research are happening to know the reason behind it, as many factors are unknown.

Some studies determined that this form of hair loss is generally related to androgens, which is a hormone. Androgens are known as an important factor in both males and females such as regulating hair growth as well as sex drive.

It shows that when there is an increased level of androgens then the hair follicles have a short cycle of hair growth as well as the delay in the growth of new hair.

The pattern of Genetic Hair Loss

There are many ways to know the genetic pattern of hair loss especially by determining the thinning of hair at the hairline as well as from the crown area.

Over the time thinning hair expands, recedes from the hairline and it forms a circular crown on it.

So, the final outcome will be shown as a completely bald scalp except for a strip of hair along the back of the head above the nape of the neck. This is one of the most common patterns that male pattern baldness follows as there are other variations also.

Norwood’s classification describes that this is the most common pattern every man fall on it but there are also some other possibilities happen.

For many decades, this classification is used to classify male pattern hair loss. As it helps in many cases to study. But it is not complete structure many other patterns are also there. This classification only tells about one pattern of male genetic hair loss on a scale of seven degrees of severity.

As there is no proper medication to cure genetic baldness but in many cases, it shows that with proper medication genetic problem can be helpful to stop hair loss at an early stage. During the past decades, many kinds of research had developed two drugs which are very effective to deal with genetic hair loss.

However, it should be noted that there is always some kind of risk associated with any medication.

Minoxidil is one of the drugs approved by the FDA and it is known for stimulating new hair growth and preventing hair loss who are suffering from genetic baldness. As it is a solution used to rub on the scalp.

This solution is available at 2% and 5%. This percentage of drugs mainly suggested by the doctor. And it is commonly advised that it should be used after consulting with a hair-related doctor.

It is also noted that if you stop using this solution you may be started losing hair again. So many experts suggest that it should be used as long as possible for maintaining the hair.

Minoxidil usually shows its effect after 5 to 6 months. In many cases, it is also found that if anyone is suffering from genetic hair loss at an early stage then maybe he/she can get their hair back with the help of this effective drug.

This drug is also approved by the FDA and it is the first pill that helps to treat genetic hair loss effectively. It is only given to men through prescription only. It is not effective for women because it may cause serious birth defects.

We know that men who are having genetic hair loss have increased the level of DHT hormone. It is believed that the presence of DHT causes thinning hair follicles. This drug blocks the formation of DHT and helps to increase hair follicles on the scalp.

Surgical Treatment Is the Best Cure for Genetic Hair loss

The only happening way to cure the genetic hair loss is a hair transplant. Today due to advancement in technology hair transplant is an easy and effective way to get your hair back fully.

If you really want your appearance back this can be possible only through this. In a hair transplant, there is no age bar in it as well as it is totally a safe process.

This procedure happens by taking hair from chest, beard, back scalp and implanted into the bald area.

The hair transplant procedure is done to make you look smart, good hairline with thick density.

In this procedure, there are mainly two types of method

Both the FUT and FUE procedures method are different, but both provide exceptionally natural results.

Selected Grid Layout is not found. Check the element settings.