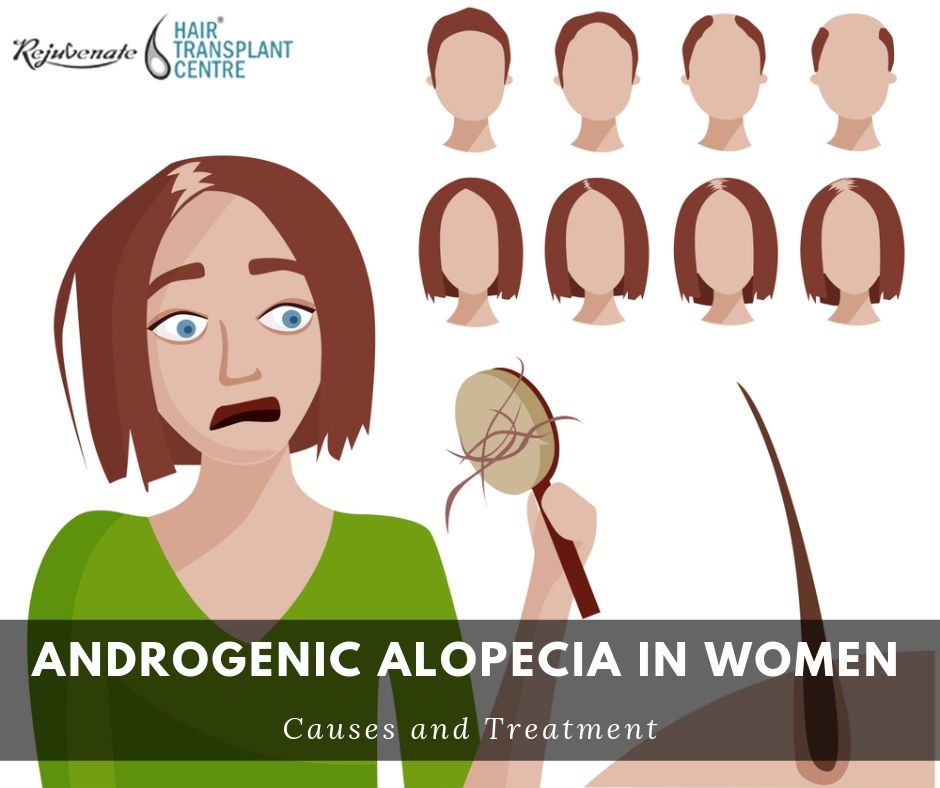 Androgenic alopecia is the most common type of baldness, it appears due to hormonal disorders in women of different age groups. The disease progresses imperceptibly, gradually leads to the formation of bald spots and a noticeable thinning of the hairline. First, the amount of hair in the middle of the parting, on the crown and in the temporal region is reduced. The follicles are negatively affected by the biologically active form of testosterone, which affects their cells. Strands become thinner, break, grow dull and lose pigmentation, then fall out. Alopecia occurs as in men, but less pronounced.

According to statistics, after 40 years, about 38% of women are concerned about excessive hair loss, 14% – the initial phase of baldness begins in reproductive age. But most often it happens after the onset of menopause, as well as in the postpartum period.

What is androgenic baldness?

With androgenic alopecia, hormonal imbalance occurs. The amount of testosterone in the female body exceeds the norm. They are needed in a certain amount because they are involved in metabolic processes and in the formation of estrogen. Due to their effects, the follicles narrow and stop developing.

The causes of the disease are laid at the genetic level. Fluctuations in hormonal levels lead to intense hair loss. Dihydrotestosterone – the active form of the male hormone damages the follicles, penetrates their cells and destroys them from the inside. It is produced by the action of the enzyme 5-alpha reductase. Gradually, the hair becomes lifeless and less pigmented, then turn into a vellus (gun) – short, small and discolored. As a result, in the absence of timely treatment baldness is formed.

10-15 years after the discovery of the first signs of the mouth of the follicles overgrown with connective tissue and completely lose their function. Often this follicle response to dihydrotestosterone is due to a genetic predisposition.

Dihydrotestosterone is in the male and female body, but the clinical picture of the disease varies with gender. Female pattern baldness begins in the crown of the vertex – in this area the hair follicles are most susceptible to androgens. The bulbs weaken, leading to hair loss. The disease is easier to treat, and the signs are less pronounced and do not lead to total baldness. The fact is that the female has almost half the size of the androgenic receptors in the fronto-parietal region. Also in the female body in greater quantities contains the enzyme aromatase, which converts the biologically active form of the hormone back to testosterone and estrogen.

Excessive production of androgens, resulting in hair loss, is due to the following factors:

The hereditary factor – a tendency to androgenic alopecia is often transmitted through the maternal line.

Hormonal restructuring of the body – in menopause, during pregnancy, and after childbirth, when the amount of estrogen (female hormones) decreases and testosterone synthesis increases.

Disorders of the neuroendocrine system – Polycystic ovary syndrome, hyperplasia of the pituitary or ovaries, growth of the adrenal cortex, diabetes, problems with the thyroid gland. Alopecia occurs due to insufficient estrogen production, while testosterone prevails, which adversely affects the hair follicles.

Strong stress and nervous system disorders – Nerve cells die, and the effects appear after 2-3 months when the situation in your life has normalized. At the same time, hair loss causes emotional discomfort and depression.

Improper diet and tight diets – Due to food restrictions, vitamins and minerals do not enter the body. Lack of nutrients causes disruptions in the reproductive system, disrupts the production of hormones.

Important information! Symptoms of the androgenic alopecia in women often manifest themselves sometime after stress or illness. This complicates the search for the root causes of pathology and its diagnosis.

According to Hamilton’s classification, it is customary to single out four stages of the androgenic alopecia in women:

The volume of hair is reduced at the crown, in the central part, which stands out against the general background.

On the crown, in the frontal part, bald spots appear.

Intensive hair loss in the region of the crown, bald spots difficult to hide.

A wide area of ​​balding appears on the head – from the forehead to the occiput.

When the endocrine system malfunctions, the pathology develops rapidly – the bald areas spread very quickly, and the hairline decreases in a short time.

Signs of the androgenic alopecia in women

The first manifestations of the androgenic alopecia in women are noticeable before the age of 30 years in 12% of cases, by the age of 50 – in 25%, by the age of 70 – in 50%. The disease often goes unnoticed, so it is difficult to identify in the early stages. It progresses very slowly, sometimes the development process takes several years. Often patients turn to trichologist when baldness has reached a large area.

Although both genders suffer from this form of the disease, the symptoms vary. Pathology is characterized by gradual onset, followed by increased hair loss, thinning hair shafts, loss of pigmentation. Temples are localized in the region of the crown, at the crown.

For female representatives, the volume in the parting zone is first reduced. This is noticeable during the inspection. Also, the following signs are observed:

acne on the scalp;

violation of the menstrual cycle.

New hairs grow on the affected areas, but they are much thinner and weaker. The volume of the hairstyle is significantly reduced, small bald patches appear in the parting area, which gradually increases in size. At the same time, due to excessive production of androgens, hair growth in other parts of the face and body, above the upper lip, on the hands, increases. The hair on the head slowly becomes thinner, their length becomes less, in the end, they fall out. At the same time on the back of the head, follicles are not affected. With this form of alopecia in women, there is no total baldness, as in the stronger sex.

Due to the aggressive effects of androgens, the hair follicle decreases in size, gradually narrows, lies shallow. The hair growth cycle also changes – the resting phase comes prematurely. Its lifespan is reduced (in healthy condition 3-6 years). Phase hair loss occurs earlier. However, the follicles do not die off completely, which speeds up the recovery process.

In a normally functioning woman’s body, estrogens predominate, but there are also androgens. When the balance is disturbed, pathology occurs. This is due to the high concentration of steroid male sex hormones produced by the ovaries. Endocrinologists call this pathology hyperandrogenism.

In androgenic alopecia, the hair becomes less frequent in front of the head, then at the crown. The hair on the back of the head does not fall out due to the increased synthesis of androgens by the body, since they are not sensitive to testosterone.

This is easily explained by biochemical processes. The enzyme 5-alpha-reductase, necessary for intensive production of dihydrotestosterone, is localized in the parietal zone. Enzymes are found on the back of the head and on the temples, turning testosterone into estradiol. This process does not pose a threat to hairline.

How to treat androgenetic alopecia in women?

Treatment of androgenic (androgenetic) alopecia in women requires an integrated approach. Having found the first signs of baldness on the top of your head, you need to sign up for a consultation with a trichologist and be examined. In order to make an accurate diagnosis and choose a therapy, it will be necessary to do research shows:

the general state of the follicles, the density of their growth;

the level of trace elements and vitamins in the body.

Sometimes the findings of other specialized specialists – a gynecologist, endocrinologist, gastroenterologist, oncologist, neurologist, psychiatrist. If a major disorder is detected, against the background of which androgenic alopecia has developed, proceed to its therapy. Then selected effective cosmetics and methods for the correction of hair loss. However, with the elimination of the root cause, which caused an imbalance of hormones, hair is usually restored.

Healing shampoos, balms, lotions, essential oils and tinctures made according to popular recipes will not give the desired result. They are used as an adjunct to basic medical treatment.

Based on the results of the examination, doctors prescribe hormonal preparations, recommends physiotherapeutic and cosmetic procedures. An individual scheme is drawn up for each case. If hair loss is associated with an excess of testosterone in the body, the endocrinologist prescribes corrective therapy. Usually prescribed contraceptives, lowering androgenic activity and drugs containing estrogen. This allows you to stop baldness in the future.

The most effective is the drug “Minoxidil”, which is applied to the affected areas. On its basis, lotions, sprays, ointments, convenient and safe to use, are produced. Scientists little studied the principle of its action. It is known that it leads to the formation of new follicles. Lubricate the affected area in the morning and evening. The visible result can be achieved six months after the start of treatment of baldness.

With androgenic alopecia in women, herbal oils can be used for massage. Massage will increase blood circulation, and the healing properties of herbs will strengthen the follicles. Also for rubbing into the scalp suitable burdock and castor oil.

It will be useful to take a decoction or infusion of medicinal herbs – vervain, clover, hop. They are a natural source of phytoestrogen, which replaces female hormones and inhibits the activity of androgen hormones. They are used both internally and externally. Due to its natural composition, it is safe for health.

Treatment of baldness will take a lot of time – noticeable results will appear in 3-6 months after the start of therapy. The process will be stabilized in a year. You will need patience and a positive attitude. Many procedures will have to be repeated repeatedly throughout life, do not stop treatment.

In severe forms of the disease, significant bald spots and bald patches remain. Such a defect can be corrected only by hair transplantation. Transplantation is resorted to in the case when conservative treatment does not work. This is a radical measure. Today, two methods of baldness correction are used:

The strip method is a traditional transplant of skin areas with hair follicles from the back of the head to the affected areas, scars often remain after the operation.

FUE is a seamless method when healthy follicles are removed from the donor area and implanted in the balding area.